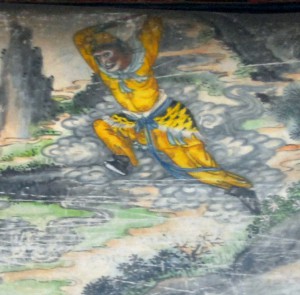 Here are 5 interesting facts about Catching Shrimp with Bare Hands: A Boy from the Mekong Delta.

1. The islands in the Mekong Delta where my husband grew up are Ship Island (Cồn Tàu) and New Dragon Island (Tân Long). Next door was Phoenix Island where the Coconut Monk had his elaborate pagoda.

2. He watched Bonanza when he was young. It was in English so he didn’t understand much except that the big cowboy always saved the day.

3. When he was 11, he spent the summer alone on his family’s island farm catching his own fish and shrimp for dinner.

4. Besides the Monkey King series, his favorite books were Les Misérables and biographies of famous scientists and inventors like the Curies, Edison, and Marconi.

5. His neighbor on the island was a South Vietnamese Army captain seeking revenge for his father’s beheading. The captain’s name, Lành, means Peace.