Here are some Vietnamese sayings and colloquialisms I’ve picked up through the years from my husband and his family: 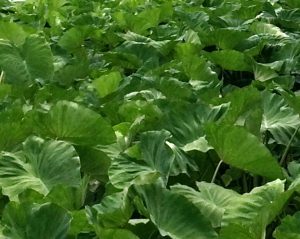 Talking to you is like water pouring on taro leaves. (Nước đổ lá môn.) Going in one ear and out the other. Nothing sticks.

Chicken head, duck butt. Something that is trying to be something it’s not. People said this about the boat Lượng’s family was building to leave Vietnam since it was a round-bottom river boat they were trying to make ocean worthy by adding a V-shape onto the front and bottom.

I’ve eaten more salt in my life than you’ve eaten sugar. Pointing out that you have more age and experience. Similar to I’ve forgotten more than you’ve learned.

You’re eating a drawing of a cake. (Ăn bánh vẻ.) Someone is fooling you or cheating you with something they made up.

Getting beaten with your own cane. (Gậy ông đập lưng ông.) To have your prank backfire or your words used against you. To fall into one’s own trap. Or as Shakespeare put it, to hoist by one’s own petard.

Being a better person 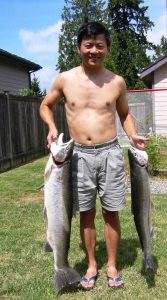 Lượng’s mother told him not to try to grab a fish in each hand–but it’s alright if you’ve already caught them.

Fish with two hands. (Bắt cá hai tay.) Don’t be greedy. Similar to a bird in the hand is better than two in the bush. There’s also Don’t catch a shrimp and lose a lobster about avoiding bad trade-offs and Use a shrimp to catch a lobster about making a better deal for yourself.

Don’t get a big nose. Be humble. Also, don’t brag so much your nose explodes (or you’re flattering me so much that my nose is going to explode.)

Curl your tongue three times before speaking. Advice my mother-in-law often gives to avoid saying something you might regret when you’re angry. Or as Thomas Jefferson said, “When angry, count to ten before you speak. If very angry, a hundred.”

Don’t lift up the back of people’s shirts to show scars when you have worse on your own back. The pot shouldn’t call the kettle black and people in glass houses shouldn’t throw stones.

If you leave something out it will grow wings. Unattended possessions will be stolen. If someone leaves their shoes outside and they disappear, you might say, “Oh, it grew wings.” If it’s a heavy vase you might say, “Oh it grew legs.”(Wings imply it went far away, legs close by.)

The frog dies because of its big mouth. Keep your mouth shut to stay out of trouble. My husband’s mother told them this all of the time. There was a very real danger that the children would say something wrong to either the Việt Cộng or the South Vietnamese Army who were fighting on the island where the family farmed.

When your house burns down you collect nails. When you try to warn someone not to make a bad decision.

If you try to hide by sticking your head in a thicket of thorny bamboo, make sure not to leave your butt out. When you go to great pains to do something make sure you do it all the way.

Don’t be the crab rolling sand balls in the East sea. (Đừng làm dã tràng xe cát biển Đông). A warning that you’re doing something futile like the sand bubbler crabs who roll balls of sand in the tideline.

Use possessions to shield yourself. Don’t use yourself to shield possessions. (Lấy của che thân. Không ai lấy thân che của.) More than knowing the right answer to the demand “Your money or your life,” this is a reminder that possessions are tools to serve you rather than you serving them. 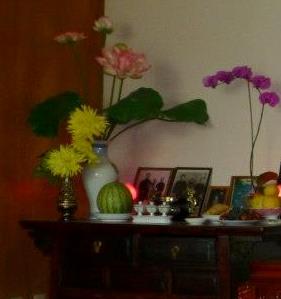 I’m going to smash my head into a pillow. An expression of frustration. The Chinese equivalent is “I need to get a block of tofu and pound my head into it.”

It’s like burning money on the altar. Spending money with nothing to show for it.

Rat nipping. (Chuột cắn.) Taking little nips here and there instead of finishing off something. You might say to someone who makes a feeble attempt at starting projects: “What are you doing, rat nipping?”

The child of a king becomes king, a child of a nun in the temple sweeps the leaves of the Bodhi tree. (Con vua thì lại làm vua, con sãi ở chùa lại quét lá đa.) A consolation for circumstances beyond your control.

You look like a chicken that swallowed rubber bands.  (Gà nuốt dây thun.) Sometimes chickens swallow rubber bands mistaking them for earthworms. If someone is sick and hacking around you’d say they look like this.

To borrow not just the ears

. . . but the eyes and thoughts of a boy growing up in islands of the Mekong Delta during the Vietnam War and Communist takeover, read Catching Shrimp with Bare Hands.