Upon meeting my husband, I started to learn simple Vietnamese words. One of the first things I learned to say was a children’s poem: 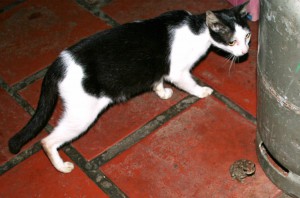 A cat (con mèo) meows meo meo, but when it’s lost or looking for food it might say ngao. Similar to English, there isn’t a word for the noise this toad makes.

The cat, the cat

The poem continues for each type of animal sound:

A cat (con mèo) meows meo meo, but when it’s lost or looking for food it might say ngao.

Owls hoot cú cú. Unlike in America where owls are synonymous with wisdom, in Vietnamese and other cultures, the appearance of an owl is an omen of death. 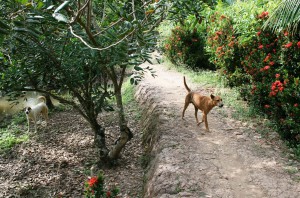 Horses neigh hí.  People don’t think of riding horses in Vietnam, but my husband’s Grandfather Lưu was a Chinese doctor who rode a white horse to visit his patients. 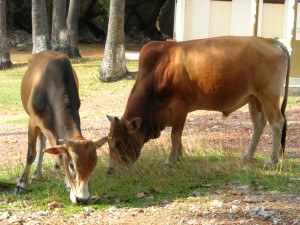 Cows moo ngò. During the war, an airplane would appear in the sky that looked like it was shooting a red line down at night because of the tracers. When these kind of airplanes came out, people said the cows were mooing because that’s what it sounded like, ngò . . . .

Goats bleat be he.

Sheep ba and larger sheep have a deeper bà. 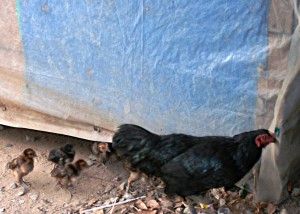 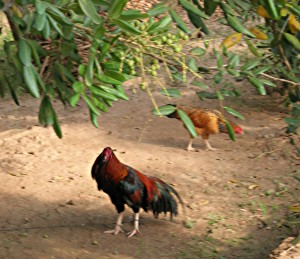 When I wrote the story of my husband growing up in the Mekong Delta, I used onomatopoeia not just for animals, but for noises like the rồ rồ rồ of a boat engine and the cóc cóc of beating a wooden drum.

To borrow not just the ears, but the eyes and thoughts of a boy growing up in islands of the Mekong Delta during the Vietnam War and Communist takeover, read Catching Shrimp with Bare Hands.