When I was looking through old photo albums for pictures of my husband’s family in Vietnam, I found a collection of stamps. I could tell from the yellow flag with three red stripes on them that the stamps were from South Vietnam. Most were stuck on a piece of black cardboard, but some where placed in the album with dates written on the back, maybe from the letters they were on. Having any symbol from the 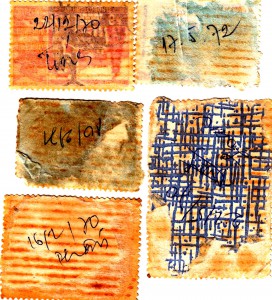 South Vietnamese government was illegal after the Communists took over in 1975, so they would have had to be hidden until my husband’s family escaped in 1979 and brought them across the sea to America.

The people and symbols on the stamps were foreign to me, and I tried to guess what they represented. I ended up looking up the stamps in an online catalog to find the date issued and the title and learned a little history in the process.

South Vietnam was recognized in 1949 (it became a republic in 1955), however, the oldest stamp in my family’s collection is a 1961 issue commemorating the 3rd century since the death of Alexandre de Rhodes (1591-1660) a Catholic missionary from France. Rhodes is credited with the creation of a latin-based Vietnamese alphabet (Quốc Ngữ—national language) that replaced the character-based nôm script. By adding symbols to roman letters, he was able to represent the tones in Vietnamese. Rhodes wrote that conversation in Vietnam “resembles the singing of birds.”

In 1962 countries throughout the world issued stamps supporting the World Health Organization’s global campaign to eradicate malaria, including the U.S. which issued a 4 cent first class stamp. South Vietnam’s stamp depicts DDT spraying to kill mosquitoes, the crux of the WHO campaign. Malaria remains one of the world’s most significant health problems. WHO estimates that in 2012 there were 207 million cases and 627,000 deaths mainly in Africa. When we visited Vietnam we saw that my husband’s old house had been turned into an information center for mosquito-borne diseases. Today, global health organizations consider Vietnam a success story for greatly decreasing the number of malaria cases and their mortality through a program of insecticide-treated bed nets and early detection that has coincided with rising socioeconomic conditions.

In 1964 a series of four stamps of scenes from South Vietnam, including Phan Thiết, a fishing village. Tourists now flock to the nearby beach resort town Mũi Né.

South Vietnam was a founding member of the South East Asian games and participated in the games held in 1965 in Kuala Lumpur. The games were first held in 1958 and currently are held biennially with Cambodia, Laos, Malaysia, Burma, Singapore, Vietnam, Brunei, Indonesia, the Philippines, and Timor-Leste participating.

In 1966, South Vietnam was one of many countries issuing stamps commemorating the opening of the new World Health Organization headquarters in Geneva, a building still in use today.

The U.S. increase in troops from around 200,000 in the beginning of 1966 to over 500,000 by the end of 1967 required improvements to the communication system including the Saigon microwave station. In 1966 a stamp was released for the anniversary of the inauguration of microwave radio.

1966, a set of four stamps called Revolution Anniversary was issued for the third anniversary of the CIA-backed coup in which the first president of South Vietnam, Ngô Đình Diệm, was overthrown and assassinated. A set of stamps issued for the first anniversary in 1964 refer directly to November 1st, 1963 date of the coup while the 1966 stamp caption says “struggle and construction.”  While looking through a catalog of stamps issued by South Vietnam, I found that under Diệm, a devout Catholic criticized for discriminatory polices against Buddhists, the post office had issued a stamp honoring Our Lady of La Vang, an apparition of the Virgin Mary which appeared during a time Catholics were persecuted in Vietnam. The Buddhist Crisis in Vietnam precipitated the U.S. withdrawing support for Diệm’s government. After Diệm’s assassination, a set of stamps honoring Buddha’s birthday was issued in 1965.

Stamps from 1967 include a set of four fruit (cherimoya pictured, the others were bittermelon, cashew fruit, and betel nuts); two Labor Day stamps; and a collection celebrating handicrafts of Vietnam.

The 1968 Friendship States stamps were to promote the spirit of friendship with South Vietnam’s allies the United States, Australia, South Korea, New Zealand,  the Philippines, Taiwan, and Thailand. The Tết Offensive occurred in 1968, but stamps related to it didn’t come out until 1970.

Stamps for women and ethnic minorities in traditional costumes were among those issued in 1969.

The Việt Cộng and North Vietnamese Army staged a large-scale attack during the celebration of the Vietnamese New Year (Tết) in 1968, breaking a holiday truce and surprising the South Vietnamese Army. The Tết Offensive is widely considered a military failure that resulted in great losses for the Việt Cộng who had expected the people of the South to rise up and join the fight with them. It was, however, a public relations victory for the Communists as the American public, under the impression victory was close at hand, became disillusioned, leading to the start of U.S. troop withdrawal.

There were a series of stamps in 1970 about reconstruction after the Tết Offensive. One series was for the reconstruction of residences damaged in the Offensive and retaliation. Another was specifically for the reconstruction of Huế, the former imperial city, which was held under siege for a month by the North during the Offensive and suffered damage to its historic buildings as the U.S. forces fought to recapture it. The Battle for Huế was one of the longest in the war. The last set of stamps honors the victims of the Tết Offensive. While many Americans know about Vietnam war atrocities such as the hundreds of civilians killed in the Mỹ Lai Massacre, few know about the mass killings of civilians at Huế during the Tết Offensive. During the Massacre at Huế, Communists executed thousands of men, women, children, and infants and buried them in mass graves.

Nguyễn Đình Chiểu (1822-1888) a blind poet whose 2,076 line poem the Tale of Lục Vân Tiên is one of the most well known epic poems in Vietnamese. It was written in the nôm Vietnamese character script instead of Chinese script like most literary works of the time. Chiểu was outspoken against the French colonization of southern Vietnam.

While it’s easy to see which stamp from 1971 is for the harvest season, I would not have known that the other two stamps honored the development of rural mail delivery and old-time postal couriers. 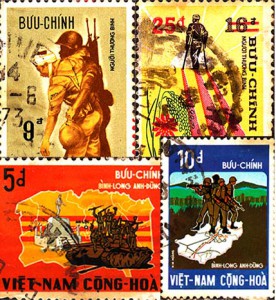 In March of 1972, the North invaded in what is called the Easter Offensive by the U.S. and Mùa Hè Đỏ Lửa (Summer of Red Fire) by the South Vietnamese. The invasion was repelled by South Vietnamese ground troops with American air support. However, the North gained territory that it was allowed to occupy in the Paris Peace Accords signed in January 1973. One set of stamps honors wounded soldiers (top two). The second (bottom two) celebrated the victory in the Battle of An Lộc, a 66-day struggle which halted the advance of the North toward Saigon. 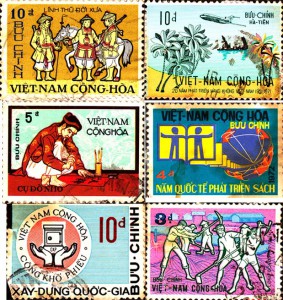 Other stamps issued in 1972 include (clockwise from upper left) remembering historic frontier guards; the celebration of 20 years of Vietnam Airlines (1951-1971); International Year of the Book; Community Development; a campaign for buying Treasury bonds; and honoring scholar-teachers (practicing calligraphy).

The last two stamps in the collection are from 1973. One is the 50 year anniversary of

Interpol. The other is celebrating the retaking of Quảng Trị which was lost to the North in the beginning of the Easter Offensive and regained in September of 1972.The Paris Peace Accords signed on January 27, 1973 effectively ending the involvement of the United States in the war.

The South Vietnamese government issued stamps for 1974 and 1975, but there are none in my family’s collection. The South Vietnamese Army continued to fight until an invasion by the North resulted in the fall of Saigon and an Unconditional Surrender on April 30, 1975.

Read Catching Shrimp with Bare Hands, the memoir of a boy growing up in the Mekong Delta during the Vietnam war its aftermath.

A complete list of Pre-1975 South Vietnam stamps, along with pictures of stamps, postal cancelations, and commemorative envelopes (event covers), is part of the collection of Flickr user Manhhai who has also curated one of the most comprehensive online albums of pictures of Vietnam during this time period.

The Freestampcatalogue, maintained by Dutch stamp dealers, provides a free searchable database for stamps issued from 1920 to the present and covers most countries. It includes pictures and dates for all stamp sets issued by South Vietnam.

3 thoughts on “A Short History of South Vietnam Through Stamps”