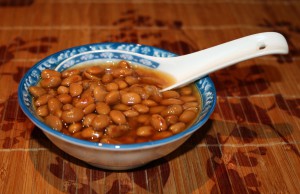 I wouldn’t have thought Mr. Fermented Soybean to be a common name, but two of my husband’s neighbors were called this. At one point both of the Mr. Fermented Soybeans or someone in their families probably made or sold the dish that earned them this nickname. Both neighbors are in my book, so to make it easier for readers I use Mr. Six Soybean for one and Mr. Five Fermented Beancurd for the other.

The numbers in Vietnamese names come from a person’s rank in their family. In the South, the first child is called number two. I read somewhere this was to trick the evil spirits into thinking they already had a family’s first born so they would leave the real firstborn child alone. However, my husband’s family tells me this custom dates back to the time a king took his people to the South. The king instructed them to call their first child number two so that when they wrote home they would appear prosperous for having so many children. This would explain why the North Vietnamese start from number one.

People often had nicknames based on their profession or a unique characteristic:

Mr. Three Belt had a thick leather belt that his potbelly rested over.

Mr. Fourth Post fished with a net strung between two posts in the stream.

Five One-Eye, the leader of a group of Việt Cộng, wore an eye patch over his missing eye.

Mr. Five Salt made salt to sell by letting ocean water run into a mud flat and evaporating it in the sun.

Six Chicken was a boy whose mother treated him like a precious egg.

My favorite nickname is the Gecko, the name the soldiers in the South Vietnamese Army gave the commander of the Việt Cộng on the island where my husband’s family farmed. His real name was Thạch Hùng, Stone Brave, but one letter away is Thạch Sùng, gecko. People said his pocked-marked face made him look like a gecko. “Never call him that name,” my husband’s mother said. “He gets upset. His name is Six Stone Brave. Just call him Mr. Six.”

But my husband liked to call him Six Gecko when he talked with his siblings. He thought the name sounded wild and unpredictable. And using it made Stone Brave seem less scary, more like Mr. Six Soybean or Aunt Curly, one of his neighbors.

4 thoughts on “Vietnamese Names: Mr. Six Soybean and the Gecko”