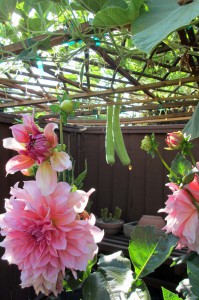 Opo squash (bầu in Vietnamese) dangling through a garden trellis.

Mướp squash grew over the water coconut leaf roof of the hut my husband’s family fled to during the Tết Offensive. Because he was small enough not to crash through the leaf roof, Lượng could sit up among the mướp squash watching the U.S. planes and helicopters retaliate by attacking a Việt Cộng base in the center of the island.

When the hut got older, the mượp broke through the roof and dangled inside. It made Lượng happy because mướp is good to eat. His family ate the flowers, the vine, and squash in stir fry and soup. But the roof leaked, so Má had them put pots and pans all over to catch the rain.

Má also had steel cables put up keep the walls of the hut from leaning in. During the monsoon season the thatch sides of the hut lifted up and sideways rain blew through. There were so many leaks they gave up trying to catch them in pots. They stood near the door so they could run out if the hut collapsed.

“Why not put up more steel cables?” Lượng asked. 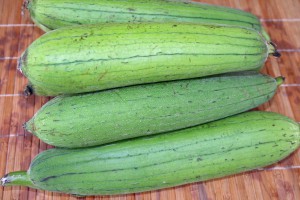 Mướp squash taste great in stir fry and soup. Left on the vine and dried they become luffa sponges.

Má and his sisters shook their heads.

“But we need to wait for the mướp to finish growing,” Lượng said.

Of course, Má didn’t wait for the hut to fall down on them in the next rainstorm.

Unfortunately, as soon as they built a new hut the Việt Cộng started to stay with them. A group of ten men would sprawl around their hut eating and smoking. They’d borrow ropes to string up and dry their clothes on. As soon as they left, Má would pull down the ropes and hide anything they forgot, like a pair of nylon shorts, so if the Army stopped by they wouldn’t know the Việt Cộng had stayed there. Lượng’s sister and cousin would complain while they washed the pile of dishes left behind:

“Those mysterious misters use all of our rainwater and want us to serve tea.”

“They treat us like slaves, expecting us to clean up.”

“They always eat more rice than they put into the pot.” 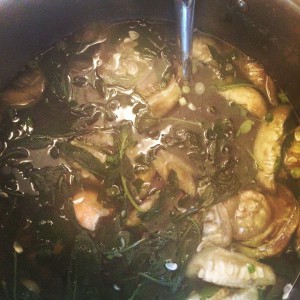 Mướp soup with leafy vegetables and shrimp for dinner.

Lượng still likes mướp and cooks it for our family. It’s a spongy, long, green squash that tastes how it sounds. It took a while before I realized that mướp squash in English is luffa squash. If it’s left on the vine until it’s old and going to seed, it can be dried out to make luffa bath sponges. Lượng’s family used them to scour pans and remove callouses from their feet. We buy our mướp at the Asian market, so I’ve never had a chance to make sponges. Whenever we eat it, I think of the mướp dangling inside my husband’s family’s old hut.