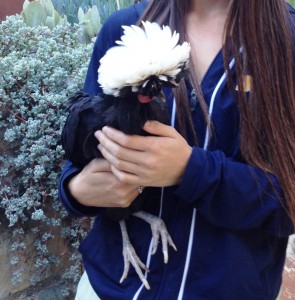 My daughter has a job babysitting chickens for our neighbors when they’re on vacation. A side benefit is fresh eggs.

Last time most of the chickens were molting, so she said they were crabby. They didn’t want her to pick them up. Only the one chicken that wasn’t molting was laying eggs.

She gets paid quite a lot. My husband doesn’t understand this. “Those are expensive chickens,” he says.

He doesn’t understand much about backyard farming here. A friend of ours had a rooster that woke up the neighbors. My husband offered to take care of it for her. He thought free range meat would be good. The chickens here are too fatty, he says. Instead, the rooster ended up on a farm that will let it live in peace until it meets a natural end.

Recently, I met an acquaintance in the grocery store who was planning to make coq au vin out of a noisy rooster her husband had taken care. (Maybe he grew up on a farm too?) She thought there might be a business opportunity—so many noisy roosters in city chicken coops.

My husband grew up climbing a coconut tree and butchering a chicken himself if he wanted some meat. Chickens there were much smaller than the ones we eat here, but he’d make several dishes out of one: chicken stewed in coconut milk, rice soup with the blood and organs, and chicken with fish sauce that was salty enough to keep until the next day. They didn’t waste much. 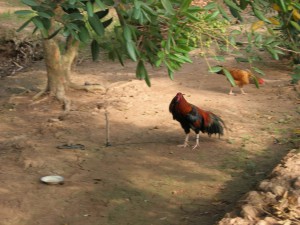 Chickens in a longan grove in the Mekong Delta.

He liked the chickens. He and his brother would let the chickens into their hut to sleep under their wooden beds.This kept the chickens from getting wet and sick during the summer rainy season. The quiet cooing of the chickens at night kept the boys company when they were out in the countryside alone. And the chickens weren’t messy inside. They treated it like their nest.

The  family’s favorite chicken back then was a good egg-laying hen that survived the South Vietnamese Army shooting at it with an M-16. Later Việt Cộng tried to shoot the hen with an AK-47. It survived. “That was a smart hen,” my husband says. “That hen wasn’t scrawny like all the rest. It was round and heavy like a walking coconut.”

The hen died when it was too old to lay eggs anymore. It got caught out in the rain and got sick. “That hen was tough to eat,” his step-grandmother said.