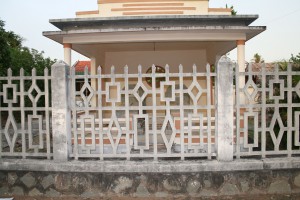 Graves in front of Mr. Xuyên’s house in Quới Sơn.

My husband and I were interviewing his mother about her search for her missing sister’s final resting place. Talk of a sister tied to a post by the Việt Cộng and left to drown in the rising tide carries a heaviness, but Má’s eyes lit up at being able to tell her story. To be heard. “You’ll like this,” my husband said.

I leaned in, curious. For over an hour we had been recording his mother telling her story in Vietnamese, and I had only caught parts of it. “Around the same time the Việt Cộng killed my aunt, they killed Mr. Three Xuyên too,” he said. “Then they dragged his body by the legs for two kilometers and left his torn-up body in front of his house.”

I looked at Má, shocked. Tears started in my eyes. “I don’t like that,” I said, choked up. I’d never met Mr. Three Xuyên, but I wrote about him. He was the neighbor in the fancy French-style house that chased my husband and his brothers when they stole mangoes from his tree. He was the one who helped hide my husband’s father when he was called to Việt Cộng meetings—meetings where someone in attendance, no one knew who until they got there, was executed.

My husband lost his smile. “I don’t either.” My husband and family often tell of the horrible things that happened to them with a laugh. It can seem disconcerting, but with all the death they witnessed it’s survival. “I always thought he got sick and died,” he said. “I guess the Việt Cộng thought he was a spy because he traveled back and forth between the countryside and the city.”

I thought of how close Má came to the same fate as her sister and Mr. Third Xuyên. The Việt Cộng put her on trial for being a spy for the same reason. She was only saved because Three Flower, the girlfriend of the local leader of the Việt Cộng, defended her. Three Flower worked for Má cutting grass and was a neighbor. She stood up and pledged her life that Má was a hardworking farmer not a spy. 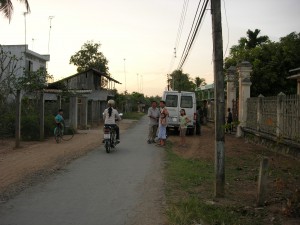 The road through Quới Sơn. We parked next to the concrete pillars of the gate in front of Mr. Xuyên’s house. The concrete fence replaces the iron wrought one that was there when Lượng lived next door.

I wrote about so many kinds of death in my husband’s story—a beheaded neighbor whose ghost helps locate his discarded body, a cousin brought home in pieces in a body bag, a grandfather gasping for his final breaths. I knew these stories long before I started to write them, the ending far in the past. But this death shook me. I had imagined Mr. Three Xuyên living to an old age safely in his big house. Now his torn body lies on the street in front of the ornate fence surrounding his house. Everything in my mind had to shift.

We had finished interviewing Má, so we sat in the room silently. What started out as the story of the search for the resting place of a sister lost forty years ago ended in a death that struck as if it had happened today.