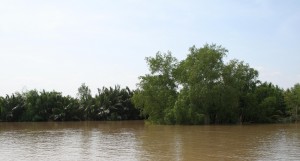 Water coconuts (left) and cheap trees (right) on the edge of Ship Island (Cồn Tàu) in the Mekong Delta.

Ever since my husband first started telling me the stories of his childhood in Vietnam, he talked about cheap trees.

When his family flees to Ship Island (Cồn Tàu) after the Tết Offensive:

“Má points to an island in front of us that’s surrounded by cheap trees. The trees look like they’re growing out of the water. Their roots stick straight up around the trunks like reeds. We head toward the trees like we’re going to run into them. . . . Cồn Tàu doesn’t seem solid. It floats like a raft of cheap trees. Má slows the boat and enters a small stream that cuts into the island.” 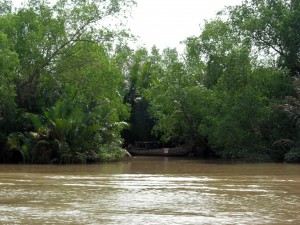 Cheap trees hide a boat in another stream that leads into Ship Island (Cồn Tàu).

I just accepted that there were cheap trees in Vietnam. It was one more thing Lượng told me about that I had never seen or heard of.

In another story, a Việt Cộng dressed in black nylon stands on a cheap tree on the stream bank preventing his mother from taking her boat further into the island to her farm. Later, Lượng climbs up onto that same cheap tree stump and watches his sister being born in a boat.

It was only when I started writing down his stories and wanted to see a picture of a cheap tree that I started to search the Internet. I couldn’t find the name anywhere. My husband only knew them as cây bần, literally “tree cheap” in Vietnamese. 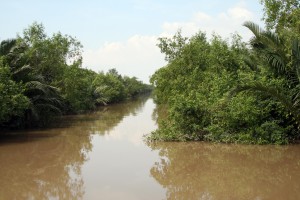 Cheap trees and water coconuts line a channel that cuts across an island in the Mekong Delta.

But when we went to visit the Mekong Delta, there they were: cheap trees and water coconuts lined the river and the streams. My husband picked some of the small green fruits that grow on cheap trees. They’re edible but as sour as tamarind.

Looking at pictures of trees on the Internet and trying to match them with what cheap trees looked like, I found that they were a type of cork tree called a mangrove apple in English. I asked my husband if we should call them by the English words in his story. He said those words weren’t the right names for the trees he grew up with. They were cheap trees. 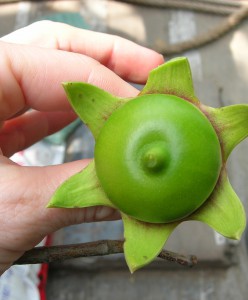 You can find my husband’s story in Catching Shrimp with Bare Hands: A Boy from the Mekong Delta.